Get ready to close your NECA 2021 Nashville experience with the All-Star Jam, a nonstop concert featuring some of the top entertainers in the history of rock and country. The All-Star Jam features Don Felder, former lead guitarist of the Eagles, Steve Augeri, former Journey lead vocalist, and Eddie Montgomery of country duo Montgomery Gentry.

This high-energy show will be packed with memorable classic rock and country hits, with each special guest performing greatest hits and some of their favorite covers. This entire concert is backed by the house band Sixwire, a country band that has been featured on “The Next Great American Band,”CMT’s “Next Superstar,” and on the ABC drama series “Nashville.” They were also featured as the house band for the 2019 NFL Draft in Nashville. 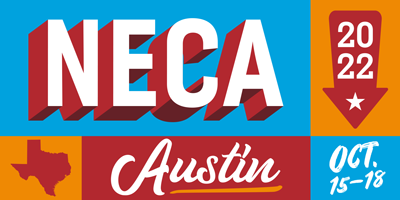 We’ll see you in Austin!


We are so excited to be bringing NECA back together again, in-person, this fall in Austin for the NECA Convention & Trade Show, Oct. 15-18, 2022. Registration will open in June.

In addition, NECA 2022 Austin will be offering a virtual solution for those unable to travel.

Be assured that we will be taking every precaution to ensure NECA 2022 Austin is done safely. We will have more detailed updates as we get closer to the event.

NECA 2022 Austin will have something for everyone, no matter where you are. Stay tuned for more information!